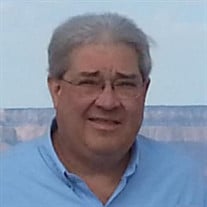 Donald R. Schwer Jr, 62, of Beecher, IL passed away Sunday December 12, 2021, in the home he built surrounded by family. He was born February 23, 1959, in Evergreen Park, IL, the son of Donald R. Sr. & Annette (Yuccas) Schwer. Donald is survived by his beloved wife, Mary (O’Shea) Schwer; his loving children, Donald (Laura) Schwer of Mokena, IL, Ryan (Christina Augustyn) Schwer of Chicago, IL, Erica (Ryan) Ewald of Wauconda, IL, and Maureen Schwer of Fairhope, AL; his loving mother Annette Schwer of Beecher, IL; his loving sisters, Darlene (Ron) Dymerski of Beecher, IL, Donna Fox of Peotone, IL, and Linda (Don) Cook of Monee, IL; two cherished grandchildren, Emery and Colin; and many nieces and nephews and great nieces and nephews. He is preceded in death by his father, Donald R. Schwer Sr., and brother-in-law, James Fox. Donald worked in the produce business in Chicago for over 30 years. In addition, he was a licensed plumber, farmer, truck driver and general DIYer. As a young man he excelled on the football field playing football for Purdue University, where he gained a B.S. in Agronomy in 1981. He was a member of Ducks Unlimited and St Paul’s Lutheran Church in Beecher. He enjoyed hunting, farming, gardening, cooking, and spending time with family. Visitation will be held Thursday, December 16, 2021, from 4 pm – 8 pm at Hack-Jensen Funeral Home in Beecher. A funeral service will be held Friday December 17, 2021, at 11 am at Zion Lutheran Church in Beecher. Reverend Michael Stein will officiate. Burial will be at St. Paul’s Cemetery in Beecher. Donations may be made to Ducks Unlimited or charity of your choice.

The family of Donald R. Schwer Jr. created this Life Tributes page to make it easy to share your memories.

Send flowers to the Schwer family.