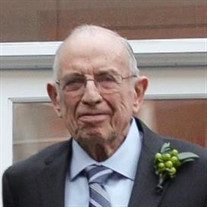 Eldon Edmund Selk, 92, formerly of Grant Park, Illinois, died Saturday (December 21, 2019) at Eastside Medical Center in Snellville, Georgia, after a struggle recovering from a fall. Born July 28, 1927 in Grant Park, he was the son of Edmund and Melinda Stedt Selk. Mr. Selk and his wife of 64 years, Frances Ohlenkamp Selk, owned a dairy and crop farm in Grant Park for many decades. He also served between 1955 and 1957 on various tours-of-duty with the United States Army in Kentucky and Germany. Over the years, Mr. Selk was primarily a farmer, but due to his absolute love of baseball (and his Chicago Cubs) was a baseball and softball umpire all across Kankakee and Will counties. His lifelong fascination with aviation inspired him to earn his private pilot license at a young age and, within just a short number of years, he and a friend had secured their own plane. Mr. Selk and his wife were members of St. John’s United Church of Christ, Beecher, where he was an active member of the men’s dartball league and served numerous terms on the church council. In later years, Mr. Selk moved to Lilburn, Georgia to be closer to his family. He is survived by his two daughters, Eileen Mae (Eric) Shepard of Fremont, Nebraska and Lori Kay (Scott) Bottens of Lilburn, Georgia; grandsons Michael Edmund (John Lemley) Selk of Lilburn, Georgia, Lucas Alexander Bottens of Lilburn, Georgia and Joshua Grant Bottens, of Colorado Springs, Colorado. Mr. Selk was preceded in death by his loving wife Frances in 2011. Visitation will be from 9:00 a.m. – 11:00 a.m. on Monday, December 30th with the funeral to immediately follow at St. John’s United Church of Christ, Beecher, officiated by the Rev. Susan Locke, with burial in the St. John’s Cemetery. Donations in memoriam may be made to St. John’s United Church of Christ, Beecher, Illinois. Hack-Jensen Funeral Home is handling the arrangements.

Eldon Edmund Selk, 92, formerly of Grant Park, Illinois, died Saturday (December 21, 2019) at Eastside Medical Center in Snellville, Georgia, after a struggle recovering from a fall. Born July 28, 1927 in Grant Park, he was the son of Edmund... View Obituary & Service Information

The family of Eldon Edmund Selk created this Life Tributes page to make it easy to share your memories.

Send flowers to the Selk family.