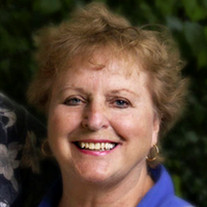 Elsie Martz of Beecher joined her husband of 57 years, Richard Martz who passed seven months ago. We are left with the most profound sense of loss, comforted only by knowing that she has been reunified with the love of her life. Elsie was born to Wilhelm and Anna (Vogl) Mayer in Chicago on July 27, 1935. Being of strong German stock, she learned the value of family, hard work and resourcefulness. She raised three children, managed apartment buildings and contributed countless volunteer hours to her community. We will never forget her laugh … that loud, joyful, full-bodied expression of her very essence. Her laugh had its own gravitational pull, inviting others into the present moment. Elsie never took herself too seriously. Her ability to laugh at herself put people at ease and allowed them to be more honest about them selves. At age 50, Elsie took her innate comedic ability to Clown College. As a “Care Clown”, she facilitated much healing thru laughter at area children’s hospitals. Elsie selflessly and lovingly cared for her parents at home for over a decade. Spending time with her grandchildren Tricia and Richie, was her life’s joy. Elsie was a “do-er”. She loved working hard: cooking, sewing, canning, gardening and remodeling. She loved entertaining and especially hosting elaborate themed family reunions. Elsie was the “hot glue” that brought the extended family together. Elsie was a lover of family, laughter and life. She is survived by a daughter Lore Martz of Seattle, WA, a daughter Suzanne Martz Hailey (husband Bob) of Nashville, TN, a son, Richard K. Martz (wife Terri) of Peotone, IL, and four grandchildren: Patricia, Richard W., Ben and Ray, and her sister Anna M. Beck of St. Louis, MO. Elsie is preceded in death by her husband, Richard, her parents, Wilhelm and Anna Mayer, and her brother, Bill (Hans) Mayer. Visitation will be held on Saturday June 22, 2013 at the Hack Funeral Home in Beecher, IL from 12-4pm with the service of remembrance immediately following. Burial will be private. Memorials may be directed to Hospice of Kankakee Valley, South Suburban Humane Society, or the charity of your choice.

Elsie Martz of Beecher joined her husband of 57 years, Richard Martz who passed seven months ago. We are left with the most profound sense of loss, comforted only by knowing that she has been reunified with the love of her life. Elsie was born... View Obituary & Service Information

The family of Elsie (Mayer) Martz created this Life Tributes page to make it easy to share your memories.

Elsie Martz of Beecher joined her husband of 57 years, Richard...

Send flowers to the Martz family.