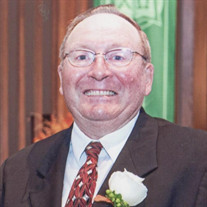 Frederick L. Von Alven, 88, of Lyons, passed away Wednesday, November 18, 2020 at his home. Born in Grant Park, Illinois on March 26, 1932, he was the son of Harry and Merle (nee Selk) Von Alven. His early life was spent in Beecher, Illinois where he graduated from Beecher Grade School and High School. Frederick served in the US Army from 1954 until 1956 at Fort Hood, Texas. On April 11, 1952 in Grant Park, Illinois, he was united in marriage to Evelyn Zimmerman. Following marriage, they resided in Beecher, Illinois before moving to Burlington 44 years ago. Evelyn preceded him in death on May 25, 2005. Frederick was a dairy farmer and member of Our Savior Lutheran Church in Burlington. He enjoyed dairy farming, polka dancing, gardening, canning and baking his homemade bread. Frederick is survived by his children, Frederick Michael (Debbie) Von Alven and Steven (Carol) Von Alven; grandchildren, Timothy (Amber) Von Alven, Kenneth (Jennifer) Von Alven, Jeffrey (Stephanie) Von Alven and Leslie (Adam) Langsbard; great-grandchildren, Haiden, Gunnar, Harper, Alex, Carli, Allison and Benjamin Von Alven, Abby Lohmeier and Dashiell and August Langsbard; siblings, Elda Mae Hackl and Jerry (Carol) Von Alven; sister and brother-in-laws, Carol (Kenneth) Bruns, Dave (Arlene) DeMotte, Robert (Carol) Zimmerman and Shirley Carpenter; along with many nieces, nephews, other relatives and friends. He was preceded in death by his brothers, Harry (Kathleen) Von Alven and James Von Alven; and brother-in-laws, Edward Hackl, Warren (Ruth) Zimmerman, Fred Carpenter, Donald Zimmerman and Kenneth Zimmerman. The family would like to thank Bert and Elaine Phelps, Andy Tennessen and Eric Burkman for their neighborly support, along with Dr. Melanie Smith and staff, Lyons Rescue Squad and the Aurora at Home staff. In lieu of flowers, memorial contributions may be made to American Cancer Society or Lyons Rescue Squad. A visitation will be held on Friday, November 27, 2020 at Hack-Jensen Funeral Home from 11am until 1pm. Service is private. We ask that you please follow the state’s guidelines where masks/face coverings and distancing are concerned. On behalf of the family and the funeral home staff, we would like to thank you for your cooperation.

Frederick L. Von Alven, 88, of Lyons, passed away Wednesday, November 18, 2020 at his home. Born in Grant Park, Illinois on March 26, 1932, he was the son of Harry and Merle (nee Selk) Von Alven. His early life was spent in Beecher, Illinois... View Obituary & Service Information

The family of Frederick L. Von Alven created this Life Tributes page to make it easy to share your memories.