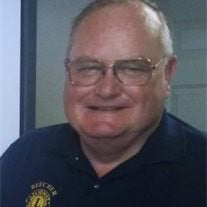 Obituary Gary Ronald “Joe” Cook, Sr. of Beecher, IL. passed away suddenly on August 17, 2019 in Tomahawk, WI. at the age of 73. He was born in Chicago, IL on July 29, 1946 to the late Richard and Sally (nee Mitchen) Cook. He is survived by his beloved wife Margie (nee Lloyd). They were married on October 3, 1964 at St. Stephens Methodist Church in Chicago, IL. That union produced four children he loved dearly – Nancy Ramirez, Gary, Jr. (Cynthia) Cook, Adam (Karen) Cook and Jason (Jodi) Cook. He is further survived by 14 grandchildren and 6 great grandchildren whom he adored. He leaves behind his sisters – Margaret (late Robert) Rosinski, Janet (Tom) Wilson, and Kathy (Don) Chrisman. Also two brothers – Richard (Gail) Cook and Dennis (late Lynise) Cook. His sisters-in-law Janet (Ron) Vuich and Judy (Albert) Antoniazzi and brothers-in-law Rocky and Robert Lloyd, and many nieces and nephews. He was also preceded in death by a granddaughter, Janie Cook, a great grandson Aiden Ramirez and a brother, Raymond Cook, Sr. Joe was born and raised on Chicago’s south side. He started working at Verson AllSteel Press Co. as a machinist in 1964, and continued his employment there until they closed in 2001. He then worked at Power Brake Dies until his retirement in 2012. Joe and Margie lived in Dolton, IL for 33 years before moving to Beecher in 2002. They bought a piece of property in 1979 next door to his parents on the Spirit River in Tomahawk, WI. They soon built a home there and enjoyed many summers fishing, boating and swimming with their family and friends. Joe loved his “Wisconsin House”, and spent his last days there. He also loved Beecher, where he and Margie became active members of their church and community. They were members of Zion Lutheran Church, where Joe served as a trustee for many years. Joe also played “Santa” for over 40 years, 12 of those in Beecher, and always enjoyed kids of all ages who climbed up on his lap. He was also a member of the Beecher Lion’s Club, and in 2016 was their “Citizen of the Year”. Upon his retirement in 2012, he started working at Alecia’s House, a food pantry that served Beecher and other nearby communities. He also cut grass at Fireman’s Park. He loved that zero turn! His cheerful demeanor and spirit of volunteerism earned him the “Citizen of the Year” award in 2015. His passing leaves huge holes in our family, Beloved Zion and the town of Beecher, all of which Joe was a vital part. Visitation will be Friday, August 23, 2019 from 3 to 8 pm at Hack-Jensen Funeral Home. There will also be an hour of visitation starting at 10 am before the funeral service on Saturday, August 24, 2019 at 11:00 am at Zion Lutheran Church, Beecher. In lieu of flowers, donations may be made to Zion Lutheran Church 540 Oak Park Ave, Beecher, IL 60401 or the Beecher Lion’s Club P.O. Box 3, Beecher, Illinois, 60401. To send flowers to Gary's family, please visit our floral section.

The family of Gary "Joe" Cook created this Life Tributes page to make it easy to share your memories.

Send flowers to the Cook family.