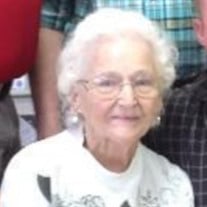 Georgeanna Ruth Lloyd, nee Dunnett, late of Beecher, IL. formerly of Chicago Heights, IL., passed away Wednesay, October 21, 2020 at the age of 94. She was born in Chicago, IL on April 13, 1926 to Walter George and Anna (nee Hueston) Dunnett. Georgeanna’s parents moved to Shorewood, WI, when she was young and she spoke often of those years with fondness. Returning to Chicago for her high school years, she later met and married Claude Andrew Lloyd, who passed away in 1973. She was also proceeded in death by her parents, sisters Viola (late Forbes) Giles, Margaret (late Ray) Colby, brothers Norman “Bud” and William (late Jean), brother-in-law Robert (Esther), sons-in-law Joe Scheafer, Gary (Joe) Cook, grandson Joshua Giba, great-granddaughter Janie Cook, and great- great grandson Aiden Ramirez. She is survived by her loving children, Margie (late Gary (“Joe”) Cook, Rocky, Robert, Janet (Ron) Vuich and Judy (Albert) Antoniazzi. She is further survived by 13 grandchildren, 26 great grandchildren, 7 great, great grandchildren and many nieces and nephews. The wake will be held at Hack-Jensen Funeral Home in Beecher, IL, on Monday, October 26th from 4-7 pm. Funeral service will be private. We ask that you please follow the state’s guidelines where masks/face coverings and distancing are concerned. On behalf of the family and the funeral home staff, we would like to thank you for your cooperation. Memorials may be made to the wishes of the family.

The family of Georgeanna R. Lloyd created this Life Tributes page to make it easy to share your memories.

Send flowers to the Lloyd family.