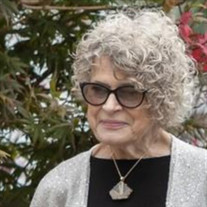 CRETE- Jill A. Hansen, 79, passed away peacefully, surrounded by her family on July 23, 2021 in a Hinsdale, Illinois hospital. She was born October 6, 1941, in Chicago, Illinois, the daughter of John F. and Marguery (Bigelow) O’Brien. Jill graduated from Mother of Sorrows High School, Class of 1959. Following graduation, she obtained an Associates Degree in Accounting, from Thornton Community College. On February 11, 1961 she married Kenneth D. Hansen and they settled in Harvey, Ilinois where they started their family. In 1974, they built a home in Crete, Illinois, where they have remained. February 2021 was a true milestone anniversary of 60 years! Jill worked in Ingalls Hospital's Business Office for 19 years. During this time, Jill found everlasting friendships that still remain. August of 1978, The Finishing Touch Florist was founded by Jill, her mom Marguery and sister, Donna. Together they opened a storefront in Crete, where her dreams of owning her own business and working with flowers, came true. The flower shop is celebrating 43 years under Jill's watchful eye, it was her passion and purpose for rising each day. Typically, she rose before the sun, drove into work for a full 8 hour day, gleefully strolled through the garden (zinnias were her favorite), would tidy up the house and settle for an evening of coloring while watching the Game Show Network. She was darn good at solving those puzzles! She worked hard in the shop, with her family and for the community she loved so much. Jill and Ken became snow birds in 1989 joining the community at Reflections on Silver Lake, in Avon Park, Florida. Jill made many of her dearest friendships at Reflections, many of those friends became her second family. Jill was given the nickname of “Minnie” by the Florida friends, because of her love of all things Disney and Minnie Mouse. Her Florida home was affectionately referred to as “Minnie’s Mansion”. In 1982, with the birth of Jill’s first grandchild, “Minnie” turned into “Mimi”, and she became everyone’s Mimi. She was the strongest and kindest person, who had the ability to make those around her feel pure joy. She was a light, and found the very best in each person that crossed her path. She was class and resilience in the smallest package. She has been a volunteer her whole life and was generous with her love, time and friendship. She always had time for you and found the right words to make you feel special for being the very best version of yourself. Mimi treated every customer that came into the shop like family. She created the most beautiful bridal bouquets like they were for her own daughters. She comforted those that came in for flowers for loved ones that had passed and consoled strangers with hugs and prayers. She found happiness in the little things. She was the master of gift giving and any gift from Mimi was adorned with care, love and just a bit of sparkle, making each gift look like a piece of art. She is loved by an entire town, honored and respected as the “Queen Bee” of our multi-generational hive of worker bee women. She is a role model and mentor to women and young girls alike, has always reminded us to plant our own garden (not to expect someone to do it for you) and celebrate our successes, no matter the size. In addition to her husband Kenneth Hansen, Jill is survived by her daughters; Holly Milburn of Crete and Heather Hansen (Chris Collins) of Sycamore; Six grandchildren, Stacey Gornor (Chris) of Crete, Giana Poerio of Champaign, Illinois, Justin Collins of Elgin, Illinois, Anthony Poerio of Fairbanks, Alaska, Colby Collins of Elgin, Illinois, and sister, Donna Dancik (Jim) of Anderson, South Carolina; many nieces and nephews. In addition to her parents, Jill is preceded in death by her brother, John Francis O’Brien and her son-in-law, Ken Milburn. A Celebration of Remembrance will take place in the near future, with a party that will make her proud. Those who wish to remember Jill in a special way, can honor her memory with a donation to: “The Queen's Kindness Garden” at 563 W. Exchange Street, Crete, Illinois 60417 Don’t wait for an occasion to make someone feel special. Do a random act of kindness to celebrate a success or accomplishment. We all deserve a Mimi in our lives, help her spirit live on. It’s Mimi’s way of still running the show from Heaven.

CRETE- Jill A. Hansen, 79, passed away peacefully, surrounded by her family on July 23, 2021 in a Hinsdale, Illinois hospital. She was born October 6, 1941, in Chicago, Illinois, the daughter of John F. and Marguery (Bigelow) O&#8217;Brien. Jill... View Obituary & Service Information

The family of Jill A Hansen created this Life Tributes page to make it easy to share your memories.

Send flowers to the Hansen family.