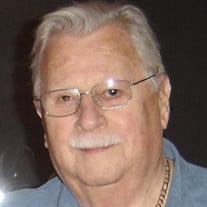 Leslie Ralph Thielman, 87, of Arlington Heights, IL passed away peacefully July 3, 2020 in his home. He was born December 12, 1932 in Hammond, Indiana to Walter Louis and Paula Marguerite Thielman. As a teenager, Les was enrolled in a mechanic school and then worked in a mechanic’s shop. He enjoyed working on cars so much that he started building cars, racing cars and go-carts. Les later then served in the United States Army as a land surveyor and mechanic. While working at his father’s airports, Chicago Heights Airport and Governors Air Park (Richton Park, IL), his passion for planes grew. He became a flight instructor, built full scale, and collected vintage model airplanes. Les took over the family owned airport after his father’s passing and changed its name to Wing’s Field. In June of 1953 he married Dollie Joanne Johnson and had 3 beautiful children: Sherry, Sandra, and Scott. After the passing of Dollie, Les married Carol Frances Koehn/Broertjes in August of 1969. Carol had 3 sons of her own, Mark, Scott and Kent making the family complete. Les was a true businessman/entrepreneur. After a while, he sold the airport and took on new adventures. He was a used machinery salesman (Midwest Industrial Properties), used machinery business owner (Wings Machinery and Auctions Unlimited). He even dabbled in being an auctioneer and a co-owner of a specialty gift shop (The Mole Hole) before retiring to enjoy quality time with his wife, children, and grandchildren. He had many passions that he enjoyed in his spare time, reading sci-fi and mystery novels, collecting (coins and lead soldiers). Along with being a member of Our Redeemer Lutheran Church in Prospect Heights, the Lions Club of Prospect Heights, and participated in the Beecher Mausoleum National Landmark Restoration Project. Les was an amazing, strong, and generous man who had a heart of gold. He loved being around friends and family and was always there to help someone when they were in need. He loved to entertain his grandchildren with Donald Duck impressions and singing old time songs that always made them laugh and smile. Les is survived by his children, Sherry (Larry) Gianneschi, Sandra Lee Thielman, and W. Scott Thielman and Step-son Mark Broerjtes; 15 grandchildren: Justin, Ryan, Shane, Brandon and Marisa Broertjes; Larry, Nick and Amanda Gianneschi; Christina Lee; Samantha, Stacey, Michael, Jacqueline, Alex and Steven Thielman; 7 great grandchildren, Tyler, Layla, Kain, Rocco and Gianna Broertjes; Aryanna and L.J. Gianneschi. He is preceded in death by his parents, Walter and Paula Thielman; a brother, Loren Thielman; his wives: Dollie J. Thielman and Carol F. Thielman; stepsons, Scott and Kent Broertjes. Les will be missed by all who were lucky enough to have known him. A service will be held on Saturday, July 25, 2020 at 11 a.m. at Our Redeemer Lutheran Church, 304 W. Palatine Road, Prospect Heights, IL 60070. Memorials: Memorial may be made at: Hack-Jensen Funeral Home, Beecher, IL. https://www.Hackfuneralhome.com/obituaries/Leslie-Thielman/ or at the Beecher Mausoleum www.beechermausoleum.org/Les.R.Thielman

Leslie Ralph Thielman, 87, of Arlington Heights, IL passed away peacefully July 3, 2020 in his home. He was born December 12, 1932 in Hammond, Indiana to Walter Louis and Paula Marguerite Thielman. As a teenager, Les was enrolled in a mechanic... View Obituary & Service Information

The family of Leslie Ralph Thielman created this Life Tributes page to make it easy to share your memories.

Send flowers to the Thielman family.