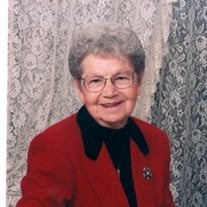 On March 18, 2014, Jesus our Good Shepherd gently led Martha Marie Herz, 95, into her Heavenly Home to live with Him in eternal joy. Martha was born June 24, 1918 to William and Eliza Biesterfeld near Grant Park, Illinois. She was baptized and confirmed into the Christian faith at Zion Lutheran Church (Soli itt congregation). On September 27, 1941, she married Emil Herz. They lived in the Grant Park and Beecher area their entire lives and were active members of Zion Lutheran Church in Beecher. Following her husband's death in 1969, Martha continued to raise three of their six children who were still at home. She loved our large family gatherings and found great joy in her grandchildren and great-grandchildren. Square dancing was a special passion of hers, and she spent many happy hours with friends in the Bachelor & Bachelorettes and WNOTS square dance clubs. Her 80th birthday party in 1998 was one big square dance party for family and friends. Martha is survived by her six children: Robert (Marilyn) Herz of Rapid City, SO, Ailleen (Art) Blum of Beecher, Sharon (Tom) Toppe of Seymour, IN, Pauline (Jim) Lehenbauer of Indianapolis, IN, Vicky Rehberg (John Rodriguez), Schererville, IN, and Kevin (Janet) Herz of Lovilia, lA, as well as her 20 grandchildren and 27 great-grandchildren. She is also survived by sister-in-Iaws Janice Biesterfeld of Peotone and Esther Biesterfeld of Grant Park. Her husband Emil, two children, infant David and 3 year-old Marilyn, granddaughters Dawn Lehenbauer and Emily Herz, and son-in-law Roger Rehberg preceded her in death, as did her parents and two brothers, Elmer and Harry Biesterfeld. Visitation will be on March 21, 2014 from 4:00 to 8:00 p.m. at Hack Funeral Home, 753 Hodges Street, Beecher, Illinois Services for Martha will be conducted at Zion Lutheran Church, 540 Oak Park Avenue, Beecher, 1I1inois at 10:30 a.m. on March 22, 2014. Memorials may be given to Zion Lutheran Church, Beecher or donor's choice. "1 am the Good Shepherd. I know My sheep and My sheep know me-just as the Father knows me anq I know the Father-and Ilay down My life for the sheep" John 10:14-15.

On March 18, 2014, Jesus our Good Shepherd gently led Martha Marie Herz, 95, into her Heavenly Home to live with Him in eternal joy. Martha was born June 24, 1918 to William and Eliza Biesterfeld near Grant Park, Illinois. She was baptized and... View Obituary & Service Information

The family of Martha M. (Biesterfeld) Herz created this Life Tributes page to make it easy to share your memories.