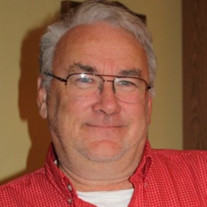 Raymond Michael Smith, 68, died Saturday June 3, 2017 surrounded by loved ones. He leaves behind his loving wife of 47 years Susan Helen (Wind) Smith; children Raymond Michael Smith Jr., Dennis Allen Smith (Julie nee Brewer), Gregory John Smith (Linda nee Stockman), and Michelle Lynn Smith; grandchildren Nathan Daniel Smith, Anthony Michael Tuley, Angelica Wind Smith, Fiona Anne Smith, Alexander Luis Velazquez, and Zayden Karlos Velazquez; Brothers Donald (Jeff Norris), Daniel (Diane nee McCallum), Sister Dorothy Kuipers (Lee); Many cousins, nieces, nephews, and life-long friends. Ray was born on July 8, 1948 in Chicago. He was baptized, confirmed, and married in his family�s church at Our Lady of Knock in Calumet City, IL where he also attended school through eighth grade. He graduated from Thornton Fractional North High School in 1966. Ray went to work for the phone company in 1966. He was then drafted into the United States National Army where he bravely and proudly served his country in the Vietnam War as a Field Radio Mechanic, and Sergeant. He was part of the 7th�Armd. Sqdn. 1st�Air Cav. He came back to the United States in 1969 and continued working for the phone company as a Customer Systems Technician and serving as a Union Steward for the IBEW Local 21. After 41 years of service, he retired in 2007. On October 16, 1969 he was engaged to Susan on Sweetest Day. They were married on Valentine�s Day in 1970. They first lived in Roseland and then moved to Lansing where they raised their family. Later they moved to Beecher, IL where Ray was actively involved in the community. As a member of Zion Lutheran Church, he served as a Trustee and volunteered within the school while being involved with his grandsons� class. Always a family man, Ray often excused himself from other activities by stating that he �needed to go home and organize his sock drawer�, so that he could spend more time with his wife and kids. When his children were young he volunteered his time to help with their many activities including Special Olympics, Boy Scouts, Little League, and other extracurricular and school activities. He was a coach for Elim Christian Baseball, SRS Basketball and SRS Baseball. His love of fishing was passed on to his children and grandchildren. He enjoyed fishing with his father-in-law, George Wind. He fished in many of the lakes, rivers, and ponds in Illinois, Indiana, and Michigan and he went on annual fishing trips to Wolf River in Winneconne, WI with his sons Dennis and Greg, grandson Nathan, and lifelong friend Dennis Stanczak. Family vacations usually involved great fishing spots such as Coldwater, Michigan where Ray would share in vacations with his siblings and their families too. Once a month for 18 years, Ray and his best buddies enjoyed a Friday night Poker Night. He also had a love of classic cars, and a hobby of collecting Case knives. He enjoyed motorcycling and loved reading. He stayed busy after retirement enjoying his time with his grandchildren. He was always present for baseball games, basketball games, soccer matches, wrestling meets, grandparents� days, fundraising dinners, dance recitals, gymnastics shows and church events. He took an active interest in each of their lives and created special memories with all 6 grandchildren. From gutting fish to having a tea party with dolls, he made each of them feel like they were the most important person in the world whenever he was with them. Ray is preceded in death by his parents Raymond and Marjorie (nee Hendricks) Smith, Sisters Peggy Kroll and Patricia Hewitt, and daughter Kimberly Anne. Visitation and prayer service will be Sunday, June 11 from 2-6pm at Zion Lutheran Church, 540 Oak Park Ave, Beecher, IL 60401. Funeral Service will be at Abraham Lincoln National Cemetery at a later date. In lieu of flowers, the family suggests donations be made to Covenant Enabling Residences of Illinois 15841 Terrace Drive Oak Forest, IL 60452. Charitable donations may be made to:Covenant Enabling Residences of Illinois15841 Terrace Drive, Oak Forest IL 60452

The family of Raymond M Smith created this Life Tributes page to make it easy to share your memories.

Send flowers to the Smith family.