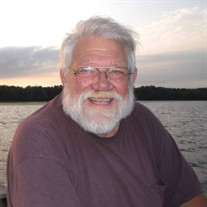 Richard Lee Tanis 80, Matteson, IL died Wednesday, September 16, 2020. Richard was born November 19th, 1939 in Grand Rapids, MI to Charles and Jessie Tanis. Richard married Roxanna Stath on June 17, 1972. He was a pro golfer and golf professional, and owner of Custom Clubs by Tanis. Survived by his sons; Gust (Pattrujar) Tsilis of CA, Bruce Tsilis of SC, Clay (Julie) Tanis of Crete, IL; four daughters Tracy (Brian) O'Malley of Prophetstown, IL, Thais (Michael) Hill of St. Joseph, MI, Jessie Tanis of Park Forest, IL, and Ariana (Wilson Larrarte) of St. John, IN; daughter-in-law Kathy (Gary) Miller of Sparta, WI. Also surviving are 17 grandchildren and 18 great grandchildren. He is preceded in death by his wife, Roxanna, his son, Mark Tsilis; and his siblings, Betty, Mary, Charles Jr., Gloria, Thomas and Norma. Richard was a member of St. John's Faith Church in Matteson and a U.S. Army veteran. He enjoyed fishing, golfing, trap and skeet shooting, his cabin, watching the Cubs, a rainy night and playing cards. He was a genuine, gentle and giving man who was referred to by many as their second father. A visitation will be held on Saturday, October 3rd from 12:30-2:30 (service to follow) at the American Legion in Matteson, IL. In lieu of flowers, donations can be made to St. John's Faith Church of Matteson, or Glenwood Academy in Glenwood, IL .

The family of Richard Lee Tanis created this Life Tributes page to make it easy to share your memories.

Send flowers to the Tanis family.