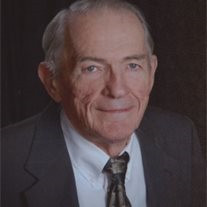 Richard H Wehling, 81 of Beecher, IL died at St. James Hospital, Chicago Heights on Sunday, Dec. 20, 2015. Richard was born in Beecher, the son of Edwin and Lydia Stoeven Wehling on May 16, 1934. He married Beverly Nottorf on Sept. 11, 1954. Richard was a devoted Christian and a lifelong member of Zion Lutheran church were he served as a trustee. Richard was part owner of Wehling Well Works in Beecher, a member of Ducks Unlimited and the National Water Well Association. He loved hunting, fishing and spending time with his family. Surviving Richard are his wife Beverly, two sons: Rick (Sharon) Wehling and Robert (Julie) Wehling both of Beecher; two daughters: Kay (Dennis) Bunte of Beecher and Julia (David) Mack of Peoria, Illinois; ten grandchildren: Mandy, Anita, Kendra, Christina, Ryan, Jenna, Ariel, Paige, Zachary, and Blake; nine great grandchildren: Mia, Mardi, Elliott, Megan, Nora, Harmony, Mollie, Maeve and Elias as well as one brother Wendell (Judy) Wehling of Beecher and nieces and nephews. Preceding him in death are his parents Edwin and Lydia, his mother and father in law Walter and Alma�Nottorf�and�a grandson Marty Bunte. Visitation will be on Tuesday, Dec. 22, 2015 at Hack Funeral Home in Beecher from 3:00 pm until 8:00 pm and the funeral will be on Wednesday, Dec. 23, 2015 at Zion Lutheran Church in Beecher at 10:30 am officiated by Reverends Ronald Rock and Aaron Moldenhauer. Burial will be in St. Paul�s Cemetery in Beecher. Memorials may be directed to Zion Lutheran Church.

The family of Richard H Wehling created this Life Tributes page to make it easy to share your memories.

Send flowers to the Wehling family.