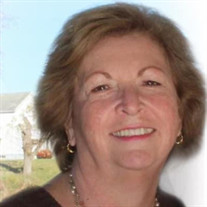 Sally A. (Radtke) Gold, 71, of Dyer, passed away Tuesday, January 18, 2022 at her home. She was born October 31, 1950 in Chicago Heights, the daughter of Earl and Ruth Haseman. She was the middle of three daughters. She was a System Analyst – Specialist. Her career included employment at: Ingalls Memorial Hospital, Chicago Partners 1997 – 2001, Rush 2001 – 2006, Methodist 2006, University of Chicago Medical Center from 2006 until her retirement in 2018. On August 26, 2017 she married Bill Gold and was a member of Living Creek Christian Church of Monee. She was an avid crafter and cake decorator. She enjoyed taking care of her yard and feeding the wildlife in it. Her biggest pastime was spending time with her grandchildren. She loved spending time and enjoying retirement with her beloved husband, Bill. Sally was an extremely generous person and was always willing to help someone in need, never asking for anything in return. Sally is survived by her children, Deanna (boyfriend, Scott Samuels) Furno of Argos, Indiana and Kim (Solo) Pina of Beecher; Scott (Lisa) Gold and Anne (Eric) Jakob; her loving grandchildren, Tristan, Mason, Rylan, and Isabella Pina; PJ (Megan) Furno and Sara (Rusty) Bonham; Will and Karlie Somerton, Sam Gold, Ian and Emily Bingham; 5 great grandchildren; her mother, Ruth Held and her siblings, Linda Ray, Denny (Diane) Held, Doug (Renee) Held, Debbie (Dave) Guthrie; a brother-in-law, Daniel Tristan; as well as many nieces, nephews, and extended family. She is preceded in death by her husband, Bill Gold; her ex-husband of 32 years, Larry Radtke; her father, Earl Haseman; stepfather, Norbert Held; sisters, Luann Tristan and Barb Toll; and a grandson, Kadin Pina. A visitation will be held Friday, January 28, 2022 at Hack-Jensen Funeral Home from 2pm until the funeral service at 6pm with Pastor Randy Roberts officiating. In lieu of flowers please make donations to Paws Critter Crossing in Chicago Heights, IL. She loved animals and has even "babysat" critters that we were rehabbing. She and Bill were avid bird & squirrel feeders. They really enjoyed watching the many varieties of species that frequented their feeders, both feathered & furry. They have been faithful supports of Paws Critter Crossing, attending the yearly fundraising dinner and participating in many other fundraisers. Together, they currently had 3 dogs. Donations can be made by: paypal- @pawscrittercrossing or Cashapp- $PawsCritterCrossing or Venmo- https://venmo.com/i/Paws-CritterCrossing If preferred, checks can be mailed to: Paws Critter Crossing 20227 Stoney Island Avenue Chicago Heights, IL 60411

Sally A. (Radtke) Gold, 71, of Dyer, passed away Tuesday, January 18, 2022 at her home. She was born October 31, 1950 in Chicago Heights, the daughter of Earl and Ruth Haseman. She was the middle of three daughters. She was a System Analyst... View Obituary & Service Information

The family of Sally (Radtke) Gold created this Life Tributes page to make it easy to share your memories.

Send flowers to the Gold family.