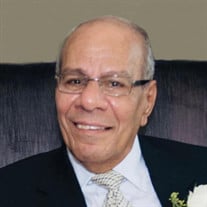 Sami Atalla Wassef, 75, of Danville, Illinois died on May 17, 2021 at Carle Memorial Hospital. There will be a service, at St. George Coptic Orthodox Church at 4601 W. Pauling Rd., Monee, IL 60449 on Thursday May 20th at noon with burial to follow at Skyline Cemetery. Sami was born on October 10, 1945 in his hometown of Alexandria, Egypt. He received two bachelor’s degrees in geology and chemistry from the University of Alexandria. He immigrated to the United States and lived in New York City where he received master’s degree in both bio and organic chemistry; his true passion. Sami married the woman who would become the love of his life, Mona on November 25, 1975. They were happily married for over 45 years. Sami worked at the VA hospital for 25 years and during that time was a published author in several scientific journals. Sami would go on to obtain a Medical Health Administration (MHA) degree from the college of St. Francis. His greatest passions were for God, his church and their community, his family, and of course his love of fishing. For those that knew him, his extended group of friends were his family as he loved them as if they were his own. He was a faithful member of St. Mina’s and Pope Kyrillos Coptic Orthodox Church in Champaign, Illinois since its inception. He is preceded in death by his mother; Maria Solomon, and his father; Atalla Wassef, his three brothers, and two sisters. He is survived by his loving wife; Mona Wassef, his brother; Milad Wassef and his family, his son and his wife; Andrew and Libby Wassef, his daughter and her husband; Miranda and Jack Bolous, and his grandchildren; Nicholas and Wesley Sami Wassef. In lieu of flowers, the family asks that a donation be made to Saint Mina’s and Pope Kyrillos Coptic Orthodox Church PO Box 755 Savoy, IL 61874 via check or by PayPal at http://www.stminachampaign.org/donate.html

Sami Atalla Wassef, 75, of Danville, Illinois died on May 17, 2021 at Carle Memorial Hospital. There will be a service, at St. George Coptic Orthodox Church at 4601 W. Pauling Rd., Monee, IL 60449 on Thursday May 20th at noon with burial to... View Obituary & Service Information

The family of Sami Atalla Wassef created this Life Tributes page to make it easy to share your memories.

Send flowers to the Wassef family.