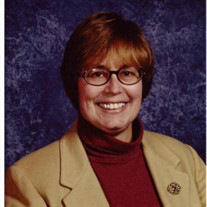 Wendy Kay Whited was born December 13th, 1952, to the late William F. Whited and Maurine (Rask) Whited in Chicago. In 1957 her family moved to South Holland IL. She loves animals, especially horses. In 1966, she acquired her first horse at the age of 14 although she started riding at age of 8. In 1973, the family moved to Washington Twp in Will County so her father could raise vegetables and she would have a corral for the horse. After her father’s untimely death in 1975, Wendy and her mother decided to stay on the farm. Two years later, her mother married Abraham David “Dave” Davis. He was like a second father to her and she loved him dearly. In 2008, after both her mother and Dave had passed on, she continued to live on the farm until the present day. Wendy is survived by her brother William (Cindy) Whited, her nephew Billy (Aemelia) Whited, and grand nieces Matilda, Penelope, and Winifred. A teacher by temperament and profession, Wendy taught junior high classes at Burnham Grammar School in Burnham IL from 1980 and continued in the classroom after becoming Principal from 1999 until she retired in 2012. In college, her first Aikido class hooked her on a lifetime study. Wendy founded Inaka Dojo in 1992 and in 2015 was awarded the rank of seventh degree black belt by Mitsugi Saotome Shihan. She developed her own Iaido kata so students could train without partners. She also created a series of courses to train aikido practitioners in the concepts and skills of effective teaching. Wendy travelled extensively throughout her life, especially in retirement; to teach or participate in Aikido events, to experience new places, and to repeatedly immerse herself in the Japanese culture she loved, including living there for two years teaching English. At home, she was a notable presence in Beecher, volunteering at the library and helping any person or because she saw in need. At home and abroad, any stranger was a friend she hadn’t met yet. Thousands of them will remember her fondly. A visitation will be held from 12pm to 2pm on Friday, October 15, 2021 at Hack-Jensen Funeral Home with a funeral service immediately following. Cremation Rites have been accorded. In lieu of flowers, the family suggests a donation to the following charities in honor of Wendy Whited; Illinois Horse Rescue and Aikido Schools of Ueshiba.

Wendy Kay Whited was born December 13th, 1952, to the late William F. Whited and Maurine (Rask) Whited in Chicago. In 1957 her family moved to South Holland IL. She loves animals, especially horses. In 1966, she acquired her first horse at the... View Obituary & Service Information

The family of Wendy Kay Whited created this Life Tributes page to make it easy to share your memories.

Send flowers to the Whited family.