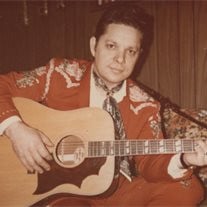 &#65533;William B. Madewell, 80 of Park Forest, IL passed away February 5, 2016 at Beecher Manor Nursing Home. William was born on September 12, 1935 in Huntsville, Alabama the son of Clyde and Inez Madewell. He is survived by his loving wife... View Obituary & Service Information

The family of William B Madewell created this Life Tributes page to make it easy to share your memories.

�William B. Madewell, 80 of Park Forest, IL passed away February...

Send flowers to the Madewell family.